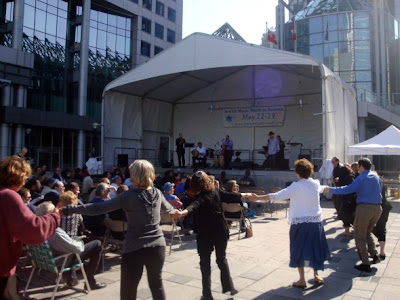 A first for Toronto, Jewish Music Week is something to get excited about. This week-long festival is an impressive feat made possible by the collaboration of dozens of Jewish organizations across Toronto. The festival has been on since Sunday and will continue until this Sunday, May 29. There are several events every day except for Shabbat, and few of them include Klezmer - a testament to the diversity of Jewish music!
The festival got off to a fun start Sunday afternoon at the Jays game. Some members of the Cantors Assembly sang beautiful, harmonized versions of the Canadian and American national anthems before the game. (In case you were wondering, the Jays lost 3-2).
Following the game, the cantors and others headed over David Pescaut Square to celebate Lag B'omer with performances by the Associated Hebrew Schools Choir, and a Jewish-Latin band. It was a beautiful day to be at an outdoor concert and the delightful Jewish-Latin beats had people dancing.
There are still dozens more events to check out but these are a few that stand out.
Wednesday
What: Music for a Jewish Gospel Service - with the one and only Mike Stein
Where: Marriot Eaton Centre
When: 10:45 AM
What: Gala Evening Concert: Halleluyah! Greatist Hits of Israel's Song Festivals
Where: Beth Tzedec Congregation
When: 7:30 PM
Thursday
What: Jewish Classical Music with "String Theory"
Where: Baycrest Terrace
When: 3 PM
What: A Movie and a Schmooze - "100 Voices" Film followed by Bantor with the Cantors
Where: Beth Tzedec
When: 7:30 PM
Friday
What: Lunch Time Music - Klezkonnection
Where: Ben Sadowski Auditorium, Mount Sinai Hospital
When: 12 PM
Shabbat Bonus: There will be 4 unique musical ways to usher in Shabbat on Friday night. Check the schedule to find the one that's right for you.
Saturday
What: Community Melaveh Malka
Where: Lodzer Centre Congregation
When: 9:45 PM - after Shabbat
Sunday
What: Jewish Big Band featuring Bob DeAngelis and his Champagne Symphony Big Bandk
Where: The Rex Hotel
When: 7 PM
Casandra Campbell
Posted by Casandra at 10:08 AM

Koffler Centre of the Arts